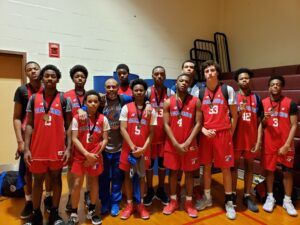 Devin Smith, another high major talent, just received an offered (summer 2016) by New Mexico State.  Devin has a great off the dribble game.  He a great ability to score and distribute the basketball.  Devin is an understated defender who can lockdown his position.  Devin averaged 12 points, 4 assists and 1.5 steals per game.

Kani Coles a 6’7” Small/ Power Forward (Central Florida) signee.  He is another high major talent who can jump to the moon.  Kani has a great power game on both ends of the floor.  Kani averages 10 points, 10 rebounds and 3 blocks per game.

Jordan Jones, a 6’8” Center is a mid-major talent (Charleston Southern) signee was the true man in the middle.  Jordan has a top shelf motor from rim to rim good athlete.  Jordan averages 9 points, 8 rebounds and 3 block per game.